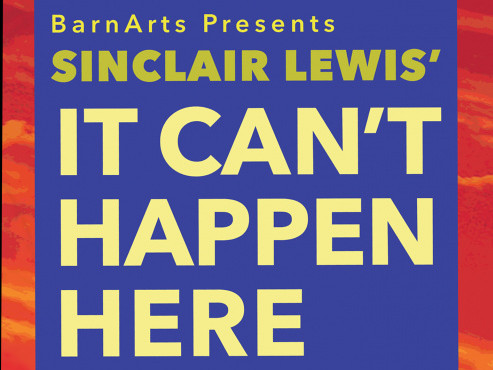 A cautionary dark satire about the fragility of democracy and how fascism can take hold even in the land of liberty, It Can't Happen Here follows the ascent of a demagogue who becomes president of the United States after fomenting fear and promising drastic economic and social reforms while promoting a return to patriotism and "traditional" values. Witnessing the new president’s tyranny from the sidelines is a Vermont newspaper editor who trusts the system will fix itself—until he ends up in a prison camp. Sinclair Lewis’ eerily prescient 1935 novel gets a fresh update in this new adaptation that examines what brings a citizenry to the point of sacrificing its own freedom and how a courageous few can prevail to overcome the fall.

The original novel by Sinclair Lewis was written at Twin Farms in Barnard in 1935 and will be performed just down the road.  The play is produced in association with film maker Teo Zagar's documentary It Happened Here about Dorothy Thompson's and Sinclair Lewis's lives in Barnard during the 1930's.