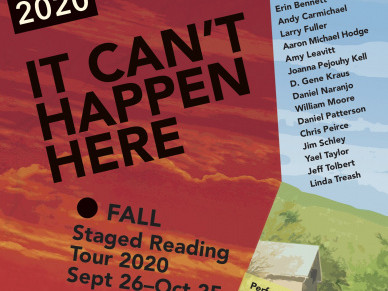 Much credit for the urgency of It Can’t Happen Here is thanks to Lewis’s wife, journalist Dorothy Thompson, who in the 1930s was viewed by many as America’s most influential woman after Eleanor Roosevelt. Having interviewed Adolf Hitler as he was consolidating power, Thompson was expelled from Germany for exposing the strongman’s totalitarian aims. She found refuge at Twin Farms, the home she shared with Lewis in Barnard, where she continued to warn of impending world war and the plight of European refugees. Her reporting spurred Sinclair Lewis to write It Can’t Happen Here at a frenzied pace in the summer of 1935.