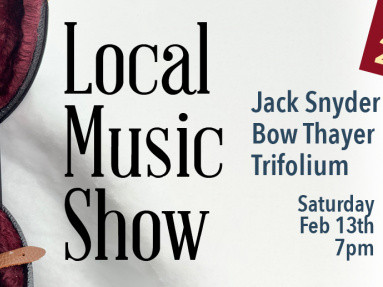 A night of music and connecting with favorite local musicians!

Zoom link will be emailed day of event.

Jack Snyder, (aka Leyeux) grew up in Barnard, and still considers it his home. Local fans have watched him grow up as a gifted performer playing with his father as a teen, heading off to Berklee College in 2013, and now finishing his degree in Music Education at the University of Vermont. He writes songs inspired by the diverse genres of acoustic, electric and electronic sounds. We will listen to some new work from Jack and hear about his plans after graduation this May.

Bow Thayer has been a staple locally, performing most years at the Barnarts Thursday Night Music Series at Feast and Field. With his roots in the Boston music scene, he now makes his home in Stockbridge, Vermont.  He has lived up to his "reputation as a sublimely gifted artist" by pursuing a creative vision that seeks to lead American music into the future.  American Songwriter says this "onetime Levon Helm compatriot is the best artist to come from New England in recent years."  As No Depression puts it, "You want inventiveness....I offer Bow Thayer."  We’ll also check in with Bow about his unique process as a visual artist, hearing about all aspects of his artistry as well as enjoy some new music, including a Covid19 ballad.

Trifolium is a trio of good friends, including our host, Chloe Powell.  She’ll be joined by bandmates Justin Park and Andy Mueller, and they’ll share how they’ve managed in this past year, as well as share new music, assembled digitally during this time of distance. Trifolium is named for the State Flower, the Red Clover, a nitrogen fixing legume.  After all, their aim is to make music that evokes a sense of belonging, of joy and beauty, and of making things a bit better in the world.

Host Chloe Powell is BarnArts Director of Music Programming.  She grew up in Barnard and returned after stints in Boston, Burlington & Italy.  She celebrates all kinds of music and has been playing in a trio with Justin for over 10 years.  She schedules the Thursday Night Music Series at Feast & Field each year and other special events that fall under BarnArts Music on the Farm programming.